Back on 14 July, the 2013 FIA European Touring Car Cup made its visit to the spectacular speed bowl at Enna-Pergusa in Sicily.

Now in the run up to this meeting, it was announced that Serbian driver Dusan Borkovic would be changing from the car he started the season in, an S2000 SEAT Leon, to a S2000 Chevrolet Cruze LT that was raced by Paul O'Neill in the 2011 British Touring Car Championship.

Now normally I keep a weathered eye on the ETCC as this showcases the best talent outside of the well known Touring Car Championships that use 2011 Super 2000. The regular drivers that take part are usually from the ADAC German ProCar Series (Germany's second tier Touring Car series) and there are alway entrants from the various Touring Car Series from Eastern Europe and Scandinavian countries.

Last year Fernando Monje stormed to the title in his S2000 SEAT Leon TDI and this led to the FIA banning any Diesel Super 2000 cars for the 2013 season. It also makes it a bit pointless racing in the S2000 class unless you had a SEAT Leon TDI...

Now this year I have kept an eye on British Driver Nicholas Hamilton who has been driving a SEAT Leon Supercopa in the Single Make Trophy class of the ETCC. While Nicholas has been scoring points in the class he is still learning the ways of Touring Car racing in the ETCC. Whilst his brothers accomplishments in Formula One are well documented, Nicholas' time in the glory and limelight of Top Level Touring Car racing will come and its an achievement already of what he has done so far.

So when it was announced that Borkovic would be driving an 2011 S2000 Cruze LT my interest suddenly peaked. Normally the S2000 class in the ETCC has BMW 320si's, SEAT Leons and the odd Honda Accord or Honda Civic.

The last time a Chevrolet Cruze was entered was back in 2011 when NIKA Racing, under the name of Chevrolet Motorsport Sweden, entered Michel Nykjaer in the car that Rickard Rydell was driving in that years Swedish Touring Car Championship. Nykjaer was driving against Pepe Oriola in a SUNRED SEAT Leon TDI and Fabrizio Giovanardi in a Hartmann Honda Accord.

Unfortunately, the car never took part in either of the two races held that year whilst Giovanardi romped to the 2011 ETCC Title. However, with the form of a Chevrolet Cruze racing at a fast track and its pedigree well known from the World Touring Car Championship where on fast tracks the car has a very good aerodynamic profile allowing it to be very slippery through the air and that makes it a quick car.

So, my thought was, can Borkovic take a win in either race, if not an assured podium? Well my seat was booked for Sunday morning where Eurosport was showing the two races live.

Borkovic started race one in ninth place overall on the grid and fourth in the S2000 class. Once the race started, he stormed through the field, passing the SMT cars with ease and passing fellow S2000 drivers Igor Skuz in a SEAT Leon and Mat'o Homola in his BMW 320si to chase Petr Fulin in his BMW 320si to the line and take second place overall. The pace of the Cruze was once again proven and the old adage of "if he'd had one more lap" couldn't have been more applicable.

For race two, Borkovic would start seventh on the grid as the race one top eight is reversed for race two. Once again, Borkovic guided the Cruze through the field to pass the SMT drivers and also lap the slower Super 1600 drivers to take third place overall on the podium behind Fulin and race winner Homola.

Now the last two races of the  2013 FIA European Touring Car Cup will take place at Brno in the Czech Republic on the 5th and 6th of October (The weekend before my birthday...nice!). Brno is normally a tight and twisty circuit that has often favoured BMW's in the past. Well, I will be cheering on Dusan Borkovic in his NIS Petrol Chevrolet Cruze to see if he can take two podiums or even take two race wins.

After all, this guy is my new guilty pleasure as I have found myself cheering on the WTCC Chevrolet drivers more and more this year. Hopefully Dusan can perform as admirably at Brno and spring a surprise.

What I also learnt as well whilst watching the two Eurosport Broadcasts was that the only entrants allowed into the ETCC are countries that hold a dometic Touring Car championship that has either S2000 or S1600 cars racing regularly and that the drivers taking part must have a Touring Car pedigree with them as well, showing that they can race on the European scene with a possible graduation to the World Touring Car Championship later on.

It also got me thinking about my fantasy usual way of entering Touring Car racing with that expected Lottery win...

Well I decided that my team that I would enter into the ETCC (If I could make it happen) would be to have Tom Onslow-Cole and Andrew Jordan in two S2000 Chevrolet Cruze LT's.

If you have a lineup you would like to suggest, pop me a tweet at @PhillipKinch. I'm always happy to chat about Touring Cars and F1.

Apparently theres some Royal birth supposed to be taking place...

All I know is its bloody hot out there so stay cool and stay safe. 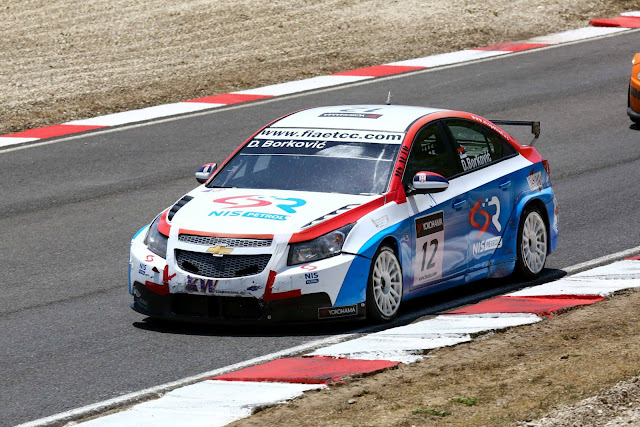